David Miko and Tom Thayer are both interdisciplinary artists based in New York. Miko is known for his mixed media paintings which include combinations of oil, enamel, lacquer, aluminum, and many other materials. His work often explores the conceptual and historical development of painting. Thayer, known for his work with video, assemblages, and puppets, explores the division between high brow and low brow. In 2011 the two artists had a collaborative exhibition at The Kitchen called New World Pigs which brought both artists’ practices together. Miko’s heavily edited and saturated animations were projected over Thayer’s multi-media paintings, which served as screens. In 2013, Eleven Rivington had an exhibition that expanded on this collaboration. 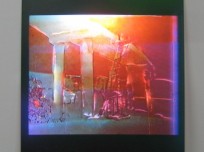