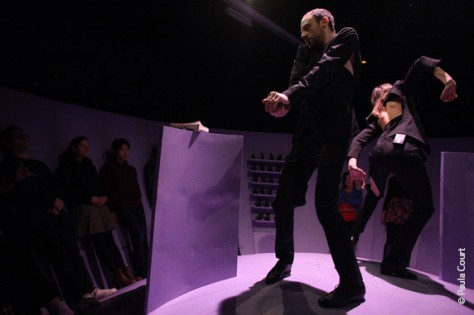 In 2013, The Kitchen presented the US premiere of Michael Portnoy’s game-show performance 27 Gnosis. Initially premiered at dOCUMENTA (13) in 2012, the performance was adapted and re-staged for The Kitchen’s second-floor gallery space. For the performance, participants were escorted into the space and a limited group of players (culled from the audience) competed in a series of participatory conversation games formed through the interplay of a set of 27 “gnoses”—sculptural forms, each one representing a heuristic or conceptual tool for attaining experiential knowledge. The language system of the game borrowed structurally from the ontologies of seventeenth-century taxonomic languages, as well as elements of modern constructed languages such as Ithkuil, aUi and Ygede. 27 Gnosis was characteristic of Portnoy’s shift into participatory work investigating the poetics of social exchange and the rules of communication and play.