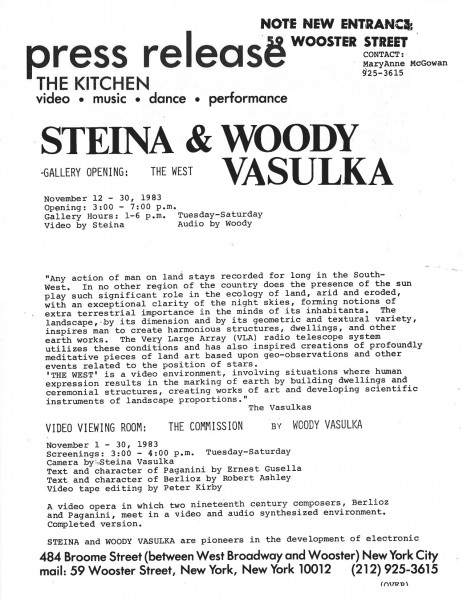 The West was an audio and video exhibition by Steina and Woody Vasulka that ran in November of 1983 at The Kitchen. Woody provided the audio and Steina filmed and edited the video presentation. It was a two video, four channel installation that ran for 30 minutes on a repeating cycle. The West concentrated on the environment of the South-West. The Vasulkas moved to Sante Fe, New Mexico in 1980; the region that inspired this work. The video “environment” dealt with a place that had a stark impact due to both human and natural forces. Steina noted how human actions as well as the sun have played a large role in the ecological impact on this region. She utilized video manipulation and editing to layer space, color, and form of her footage. The West was helped produced by grants Steina received from the National Endowment for the Arts and the Rockefeller Foundation.